One year ago this week, we were sailing on the big seas for the best vacation we’ve ever had (well so far).  Sarah and I decided to take our honeymoon in the winter instead of right after the wedding in August and we were glad we did.  We had a lot of discussions about where to go and what to do, and we ended up picking the perfect thing for the two of us.

We had heard of Ships & Dip before but never looked into going, but as soon as we saw who was going to be on board for the week long music cruise, we couldn’t resist.  The Ships & Dip music cruise, for those of you who aren’t familiar, is headlined by the band The Barenaked Ladies and they bring along a lot of their musical friends to play for the days while at sea.

Being music lovers, this was THE trip to take, especially since the band Odds was booked!  I’ve been an Odds fan for years, but have never seen them live.  What better place to see them than on the Lido deck of a cruise ship.  We’ve always liked BNL and been to a bunch of shows so we knew we couldn’t go wrong with this.

This was our first cruise so we didn’t know what to expect.  The food was perfect – buffet style – for this freestyle cruise and the drinks were cold and music was nice and loud.  No complaints here!  It was an amazing experience.  You’d be in line for the buffet and turn around and someone from one of the bands is loading their plate too, right beside you.  It was so relaxed and informal.  Just perfect. 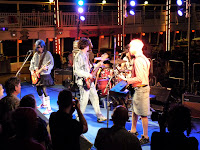 The music was outstanding.  There were a few bands that we hadn’t heard before but live music is just something else.  So much talent in one little place (while I guess a cruise ship isn’t that small).  One of the highlights for me was when members of other bands would jump up on stage and help out for a song or two – a sort of “cross-pollination” as Ed Robertson from BNL put it.  The bonus for me was seeing the alter ego of the Odds – Acid Wish – a cross-dressing power rock infused cover band — So good!

This cruise wasn’t just about the music, we also had 2 shore days in Mexico.  One stop in Costa Maya and the other in Cozumel.  Both touristy areas but we enjoyed our time in both places.  In Costa Maya, we visited Mayan Ruins and in Cozumel, we did a jeep tour and snorkeling which was fantastic.

As the cruise drew to a close, it left me wanting more.  I really hope they do another cruise because we will be on it!

After the cruise, we stayed in Florida for another week, which was a great idea because the cruise was go-go-go and laying on the beach afterwards was the perfect way to wind down this get-away.

As the title says “Best. Vacation. Ever.” It will be hard to top. 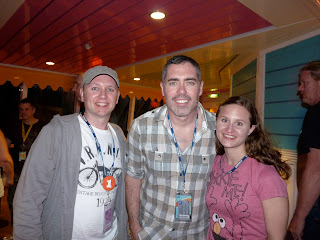