Sarah had a day off on the 25th so we took advantage of this for a full day of hiking and birding at Point Pelee. We left the house a little later than we wanted but still made it to the tip around 7:30am. Fog… again! With the strange temperatures we’ve been having, the tip was yet again surrounded by a dense fog. This didn’t hold us back. We made our way slowly to the tip, surrounded by golden-crowned kinglets, singing red-winged blackbirds, robins, and grackles.

At the tip, I could spot 2 large birds out in the lake, but because of the fog, we didn’t bother bringing the scope. Instant regret. I could see white throats and they were large. I was pretty sure I could hear loons but before I call a bird, I like to be sure with a good look because I’m still not great with calls. A loons call is pretty distinctive though but still wanted a better look. I was 95% sure they were loons but wanted confirmation because these would be first of the year Loons for me. We made our way back to the car to get the scope. We ran into another birder – Richard – who was also returning to his car to grab his scope because he thought he heard loons. Turns out they were in fact loons. New year bird and a great start to the day.

We’d heard about a black vulture in the area so we were checking everywhere. We’ve seen them in Florida, but not here. The fog was still dense through half of the day, but just after lunch, while sitting in the car in the visitor centre parking lot, the fog lifted and left beautiful blue skies. And with the clear skys — kettles of vultures and hawks. While sitting there staring at the sky, we heard a report of the Black Vulture being seen over Northwest Beach – It should be heading our way. Got it… and a second Black Vulture!! I captured both in the same frame in one of the pictures below. There were Red-tailed, a couple Coopers, a few Rough-legged and even a possible dark-morph red-tailed hawk. Just amazing. We spent about 2 hours just watching the sky but it was well worth it.

We still had a few more target species we wanted for the day, including more sparrows. We got them too! Savannah, Vesper, etc.

All-in-all it was a fantastic day. We met some great new people, who I’m sure we’ll run into again on the trails. We hit about 70 species, including 7 new year birds for me, and 3 new lifers! The lifers were Vesper Sparrow, Lesser Yellowlegs, and yes, a purple finch (they’ve alluded me until now). 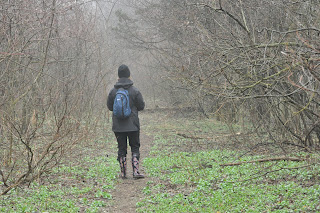