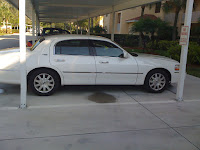 Sarah and I took another trip down to Florida for her birthday.  I hope we can make this an annual affair.  The weather is great and the migrant birds *should* be arriving.  I stress the *should* be arriving because Florida was not very birdy this time but was definitely still great.  We took the last flight out on the Tuesday night and after a few delays and a scare that the rental car company was going to close before we landed, we got to the condo around 1:30am, in our compact car – Lincoln Town Car.  Straight to bed.

Sarah spent most of Wednesday down at the pool but I still had to do some work so I stayed up at the condo.   That evening we went on our first little birding trip over to Estero Scrub Preserve.  It was a gorgeous evening.  Not a lot of birds but it was more for the walk anyway. We did find Eurasian Collared Doves, 4 species of woodpeckers including Pileated, a Sharp-shinned Hawk, an Osprey and a few more.  We planned out the next day’s birding adventures.  It was a Thursday so we thought the traffic wouldn’t be as bad as the weekend… Sanibel Island it is.

We got up before sunrise, a new thing for vacation, and were out the door quickly.  Our first stop was Bunche Beach to work on our shorebird ID.  We spent a fair bit of time trying to pick out the different species in the receding tide.  We picked up 27 species here (a few land birds were thrown in).  The highlights for us included Red Knots, 3 Plovers (Semipalmated, Black-bellied, and Piping), Marbled Godwit, a few Tern species, and a singing White-eyed Vireo.  A great start to the day.  Just as we were about to leave, someone asked us if we’d been to Sanibel Lighthouse yet.  It was going to be our next stop.  He said the Stokes have been birding there and turned up some great early migrants.  This is the news we were hoping for.  Off we went.

We’d never been to Lighthouse point as birders so we weren’t sure where to go when we got there.  We tried to find other birders to find out where to go.  This is where we ran into the Stokes!  They were extremely helpful and friendly people.  They told us what they had seen recently, where we should look and at what time.  We are so used to having to be up and birding by sunrise to see any warblers back home but they mentioned that the birds crossing the Gulf wouldn’t arrive until late morning/early afternoon because of the 16 hr flight.  Makes sense!  We searched for a few hours and we weren’t finding a lot.  We ran into a few other birders who weren’t seeing much either.  Wrong winds.  Oh well.  We did happen to run into Vince, who has had a Lazuli Bunting visiting his feeders.  He said we should stop by after.  Sounds like a plan! We spent the rest of the afternoon laying on the beach and picked up a few new birds – Magnificent Frigatebird, Barn Swallows, and some Terns.

We made a quick stop at Ding Darling before leaving the island.  Don Stokes had warned us that the tides have been really high so Ding Darling has been relatively quiet so we weren’t expecting much.  It’s still a really nice place to visit and we try and go there every time we go down to Florida.  We did get a few new birds for the trip, including Red-breasted Mergansers, a Spotted Sandpiper, and a few Lesser Yellowlegs.

I couldn’t stop thinking about that Lazuli Bunting…  Would we be able to find the house? Would the bird show up?  I had seen the RBA a week or two before we left for Florida but I didn’t expect it to wait for us, let alone us running into the person who has the feeders it’s visiting.  Off we went.  As we got there, Vince was just backing out of the driveway.  He said, go around back and that he’d be back shortly.  Another birder from New York was waiting patiently for the bird to show up.  His wife was reading a book in the car.  He was there for a few hours, waiting but no bird.  His wife was getting hungry.  After about an hour, the bird jumps out of the bushes and starts feeding on the ground under the feeders with some Indigo buntings!  It was a nice spot – Indigo Buntings, Painted Buntings, a Ground Dove, and of course the star of the show — Lazuli Bunting.  As we were leaving, Vince gave us some directions and tips on how to find the “White’s feeders,” Burrowing Owls, and the Scrub Jays — Saturday’s targets because Friday was going to be a ‘lay around the pool’ day since we just birded for over 13 hours.

To be continued in Part 2…